A few weeks ago I found an interesting tape deck online. It was a deck from Philips. It was close by so I immediately e-mailed the seller and after some conversation I fetched it with the car. It was a good price. Although Philips are not well known for the quality of their consumer decks (whereas their professional decks ARE good) I was interested because this was their last model that they made before production stopped because of the changed market conditions, everyone wanted a cassettedeck. 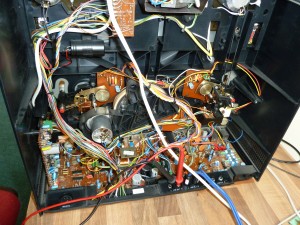 The problem with this deck is that it is entirely made of plastic. And I mean not just the front and the chassis, but even the cog wheels and everything inside. The result is that it is very light, especially compared to some of my Teacs and Tascams. So far nothing has broken. This would be a big problem as it seems to happen a lot and the plastic parts are, well, impossible to find or replace. Fingers crossed! The only thing that didn’t work was the on/off switch, but I managed to secure it in the ‘on’ position and I just unplug the unit to switch it off. Works for me! 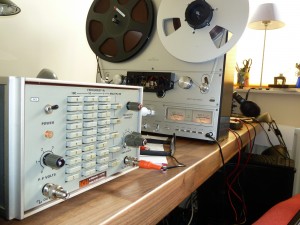 So, after the holidays I managed to find time to do my adjusting and tuning. The Service Manual was quickly found on the net and then I started work. Unfortunately the SM is, well somewhat vague in some parts. It was quite the struggle I must confess. I could put my new oscilloscope (also from Philips BTW!) to good use. In the process I found out I still need to learn to use the scope better. But I managed.

I just finished the work recently and did some tests with test signals and some music. I must say that the results are very, very good. Did I mention that this is a very good sounding deck? Switching between source and tape it is very hard to hear any difference at all. I use new BASF LPR35 tape. Especially at the middle speed of 9,5 cm/s it performs remarkably, delivering very close to the same audio quality as at the highest speed. I was really surprised.

Even at the slow speed, at 4,75 cm/s it was very acceptable. One could use that for parties where the music will not be played loud, for background use. A full reel 26 cm with 35 micrometer tape has 1100 meters on it, giving a playing time of almost 6 1/2 hours! Using the thinner tripleplay tape of 25 micrometer gives even longer playing time of 8 1/2 hours.