Yesterday I received my new cartridge: the Ortofon 2m red. It came with a brush, some screws and a little screwdriver. All in the package for €84,- 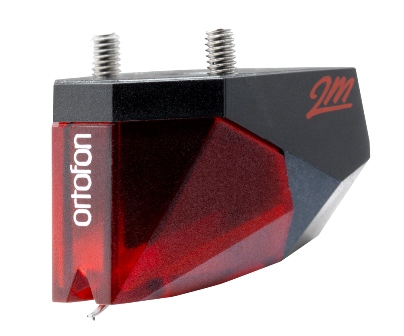 I couldn’t wait for a day off to try it so I installed it yesterday evening. I have never before installed a cartridge, and I must admit the thought of doing so was a bit daunting.

I had read a lot about installing and adjusting phono cartridges in the past few weeks so I understood the basics. I had downloaded the Technics protractor from vinylengine.com, printed it and checked the scale of the print. But now it was time to put the theory into practice. 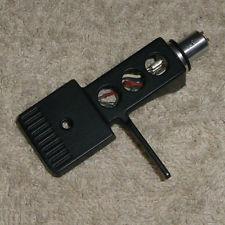 I soon realized that this new cartridge wouldn’t fit in the headshell I had designated for it. This is an old style Technics head shell with one screw on the top.

Although only one screw is visible in the picture, it has an additional mounting bracket underneath that should fit the 2 screws necessary to mount normal cartridges. But my Ortofon needs to have the heads of the screws on the topside and that is not supported in this headshell.

But fortunately I have two headshells, the other one is the newer type which has the normal two screwholes at the top. Using the screws which were provided in the package I was able to quickly attach the cartridge provisionally to the headshell. 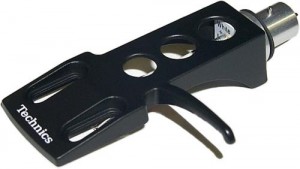 So that was fairly easy. Next was the task of adjusting the ‘contraption’ 😀 I took my protractor and put it on the turntable on top of a record.

I soon learned that when I moved the cartridge all the way to the front of the shell that the needle followed the ‘arc’ on the protractor perfectly. Yes! 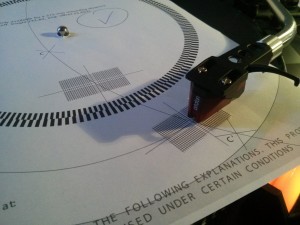 But when I tested the alignment of the cartridge on the two gridline patterns on the protractor, I found that it was not perfect in line. So I adjusted it very slightly to the point that it was in line on both patterns and then secured the screws. Pfew! Job done! 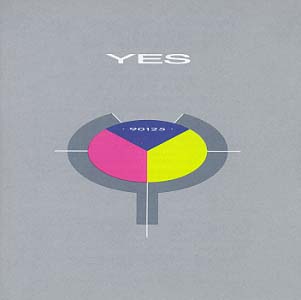 Then came the testing. I must admit I was a little but afraid, or better anxious. I tried it out with a record from Yes – 90125.

I put the needle down very very carefully.

I put on my headphones.

But as soon as the first tones from the song (Owner Of A Lonely Heart) were played, I relaxed. It sounded very very good! 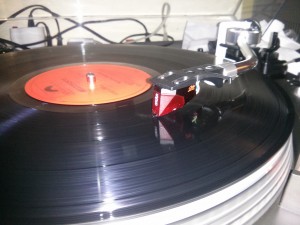 The Ortofon happily playing in my sl-1900

There is a lot of definition in the sound. There is also a lot of ‘punch’, which I like. HF tones are also ok. Bass is tight and well defined. Overall, I have never ever heard a record sound so clear. True, in the past I have not had good quality turntables. In fact, they were rubbish. But I never thought a record could sound like this. It is so close to a CD. I’m also very glad that I treated my records carefully in the past, I didn’t play them a lot (I immediately recorded them onto tape) so that I now have old, but ‘like new’ records that sound wonderful!

I continued to listen to albums from ELO, Marillion, Tchaikovsky and 12-inch’s from Chaka Khan, Unique (What I Got IS What You Need). Those were the first records I found for grabs. It was a good experience. I am pleased. In the coming evenings I will listen to some other albums.

I was surprised how quickly and how easily an inexperienced person like myself could do this task. It took me a little over an hour including the adjustments. I can recommend it to everyone.

Coming up next: cleaning the records with a LP cleaner