Since I was very young I was intrigued by recording studios and the equipment therein. Can you tell?? (cue Studer A80 blog entry). A few years ago I had the opportunity to visit the famous Wisseloord studios here in Holland and needless to say that that was a thrilling experience. I am intrigued by the recording process, and mainly the tape part. But recording techniques in general have my interest. Like how to record a solo acoustic guitar, or how to record a symphonic orchestra. And as pure as possible. In order to do that, in the old days, you need a tape recorder, and there lies the base of my fascination.

Tape has a very nasty flaw: it introduces tape hiss into the signal. Tape hiss is clearly noticeable when you play around with consumer decks, giving a nasty hiss in quiet sections when you replay your recordings. This wasn’t so much of a problem when recording from LP or FM radio, which has a background noise that would make the tape hiss less noticeable. It became a bigger problem since CDs came around and the source of the recordings were becoming quieter or even dead silent.

If you wanted to minimize the tape hiss, you had to resort to quieter, and more expensive tape. You had to use the more high-end decks, and have them calibrated properly to that tape. Thorough maintenance became even more important.

If you thought that you had a problem with tape hiss at home, imagine the problem professional recording studios had with it. They have to conform to the very highest of standards because they are at the very beginning of the audio path, a path that would result eventually with you playing the record or CD at home. So they want to introduce as little noise (in general) to the signal as possible. Adding to the problem was the fact that multi-track recorders had 16, 24 or 32 tracks that all brought their hiss to the final 2 channel stereo end-mix.
Without proper noise reduction, even in the most expensive studio with the high end tapemachines and studiotape running at high speed the end result would suffer quite substantially from tape hiss.

To circumvent this problem, studios often reverted to using devices like noise gates. When the audio level of a track would drop below a certain level, the noise gate would kick in and mute the channel on playback. This was of course done so that the downmix to 2 tracks would be more silent in the quiet parts. There is an interesting article on the use of Kepexes used by Alan Parsons on Dark Side of the Moon by Pink Floyd:

I remember extensive use of Kepex noise gates. I think part of the sound is these Kepex gates. They had a certain sound rather similar to tape compression. We were not just using them to reduce tape noise, they had a sound as well.

But, toward the end of the 60’s a new technology came around. Invented by Ray Dolby, Dolby (“A”, as it was later renamed) promised a reduction in tape noise level of around 10-15 dB. It was targeted at the professional market, and it was also used in the recording of optical sound on films for motion pictures, improving the audio quality significant.
In music studios it was an instant hit. Much of the music of the 70’s would not sound so great on CD’s as we know it now if Dolby A would not have been around.
The card that enables Dolby A for the 363 is the Cat 450 card.

Without going too much into the history of Dolby, (you can look that up on Wikipedia for yourself) suffice to say that in 1986 Dolby introduced its best performing professional noise reduction system to date: Dolby SR.
Dolby SR stands for Spectral Recording, and it utilizes different techniques to achieve an increase in dynamic range of 25 dB. Professional tests conducted using a studio environment (link) concluded that a recording made with Dolby SR was indistinguishable from a digital recording.
So, my fascination with professional tape recording equipment would not be complete without some noise reduction and/or compression units. I purchased a Dolby Model 363 rack with 2 Cat 350 modules. 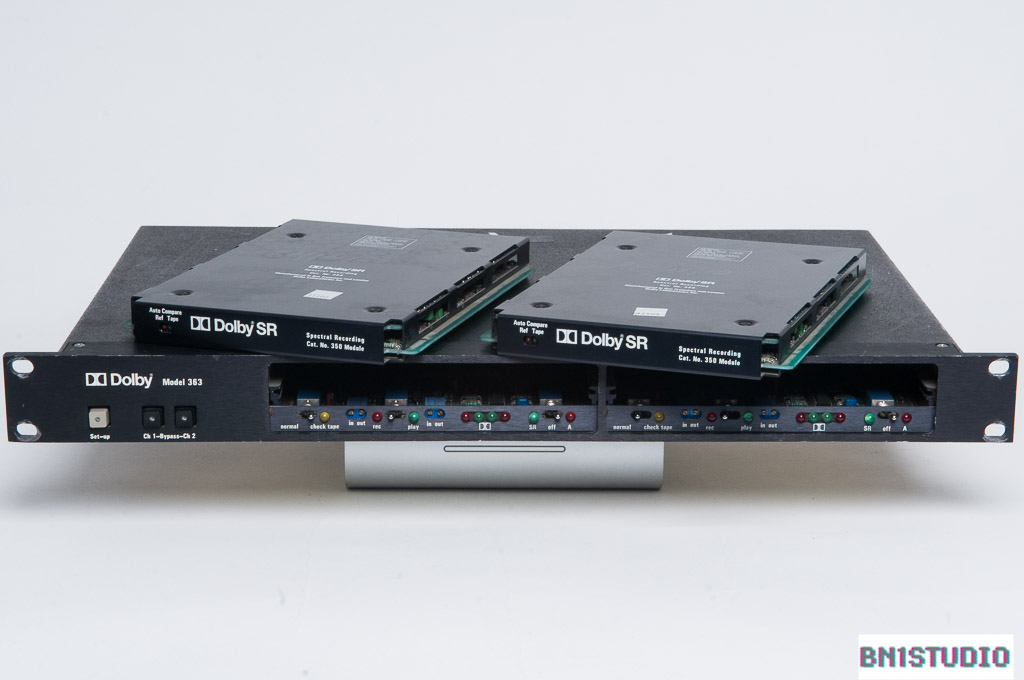 There is also a combined Dolby A/SR card, that is the Cat 300 card.

My intention was to test these out with my Studer A80. But, as I was preparing some test material, I found out that my A80 was actually too silent and my source material too noisy to test this properly. I had a vocal track that was almost super silent as far as noise is concerned.
So I took out my most ‘noisy’ deck, which I think is my Teac A3440, and recorded some vocal track on it. With, and without Dolby SR.
To be fair, this was a quick and dirty test, and in no way this was an exhaustive test. I tried to find a noisy tape as well. I found that using the SR unit I was able to push the A3440 to a level where it was rivaling a CD as far as noise and dynamic level was concerned. You have to hear it to believe it.