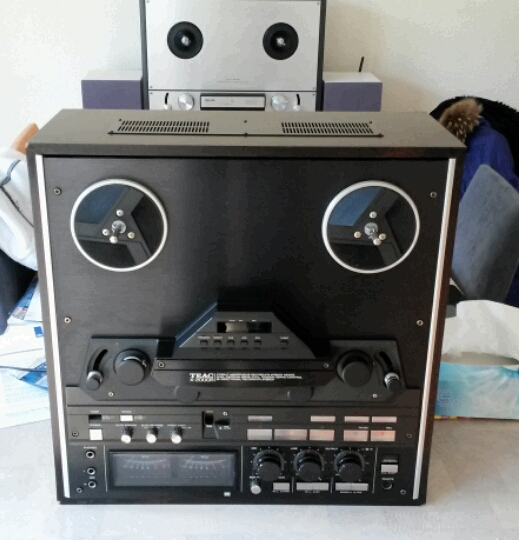 Recently I obtained, for a fair price, a Teac X-2000R. It is a stereo reverse deck, with 6 heads, which means it will record also in reverse. It has dbx built-in, and it can use (chromium) EE tape. A digital counter in hours, minutes and seconds and bias fine tuning on the front panel is also provided. It has 9,5 and 19 cm/s speeds.

Another prominent feature that is has, however proved to be a very problematic one. The deck is equipped with 2 capstans. This feature was introduced into the later tape deck models, almost towoards the end of the tapedeck-era, to further improve tape-head contact and wow&flutter. These assumptions are correct, and they work well when the deck is in new condition and everything is well calibrated and up to specifications.

On this deck however, things were not new and not up to specs. The dual capstan design is a challenge in itself, but things are further complicated by the fact that it has to function in reverse as well. On this unit that is accomplished by a belt that ‘travels’ across different parts of the flywheel that varies in diameter.

After the initial cleaning, optical and technical/mechanical, it soon became apparent that the tape handling was not up to par. Sometimes the tape would ‘run away’ from the heads a bit, resulting in loss of audio or worse: tape jam. Things were even worse when playing in reverse. I soon found out (through the service manual) that there were adjustments to be made to the tape tension.

But the increased tape tension was not the solution. When it was ok in forward play, it was bad in reverse. Or vice versa. Or it differed when loading large reels (26 cm) compared to 18 cm reels. Or it was different with different brands of tape. And that wasn’t even reproducible across sessions. And the next day it would be different again.

Of course the first thing I did was to change the belt. I have a blog of that action, but it is in dutch. So here it is, sorry only in dutch: 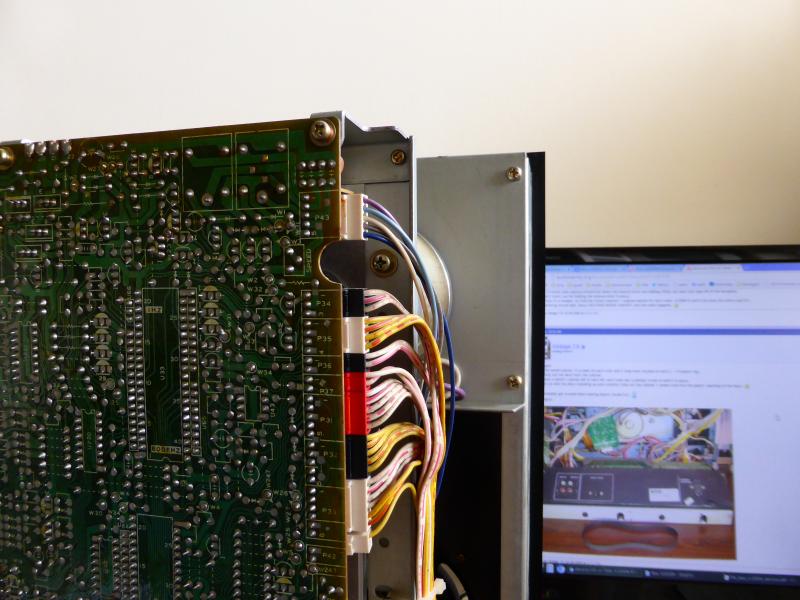 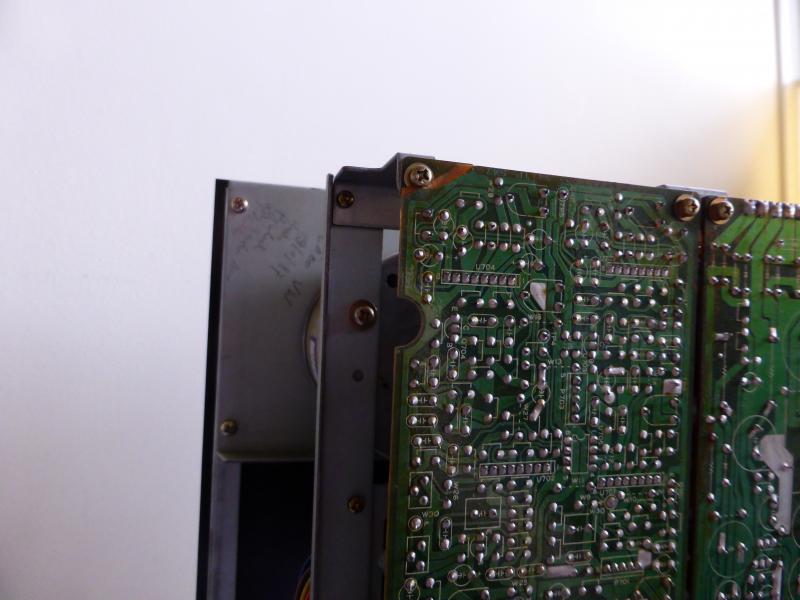 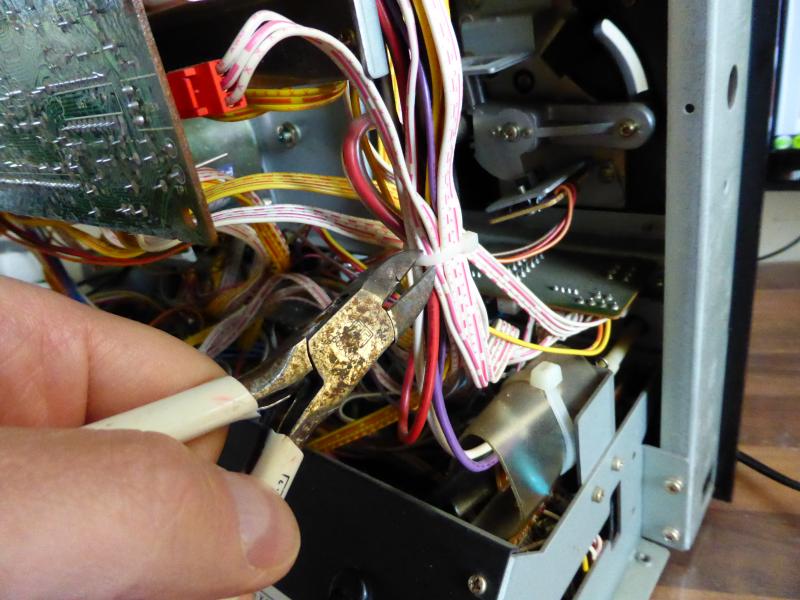 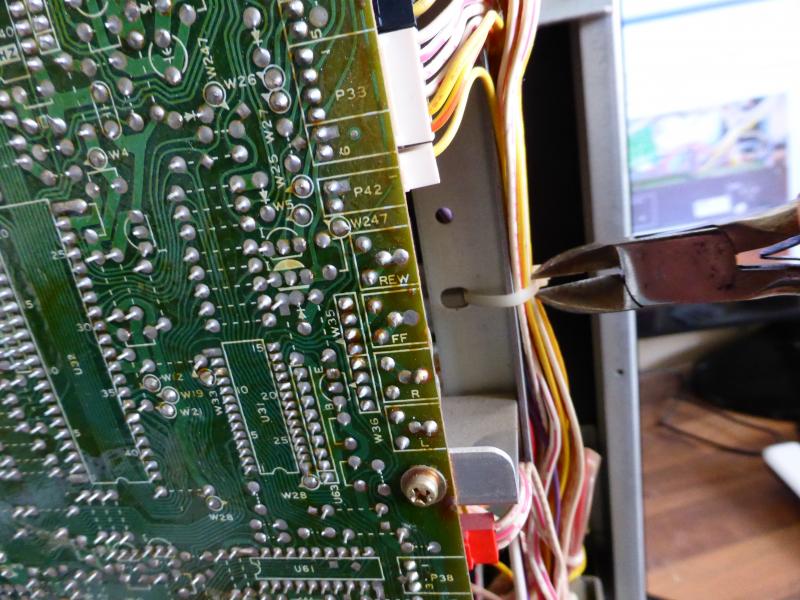 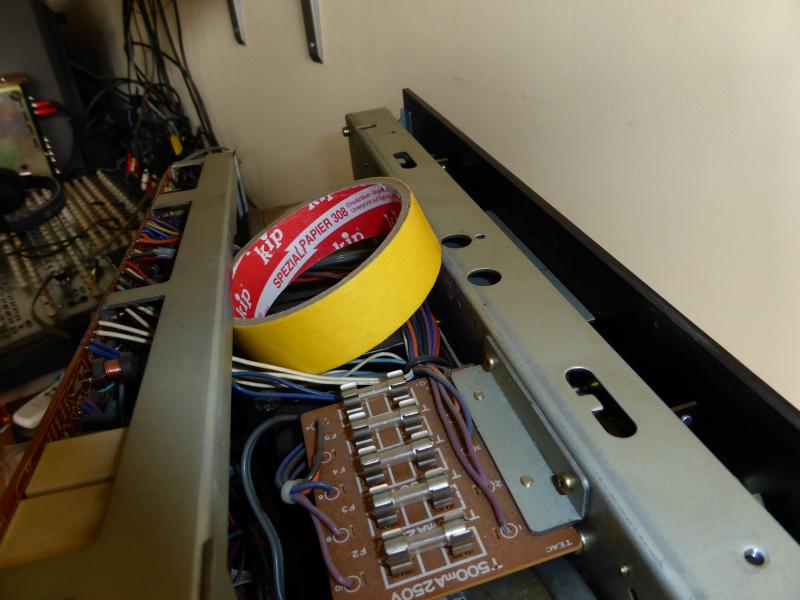 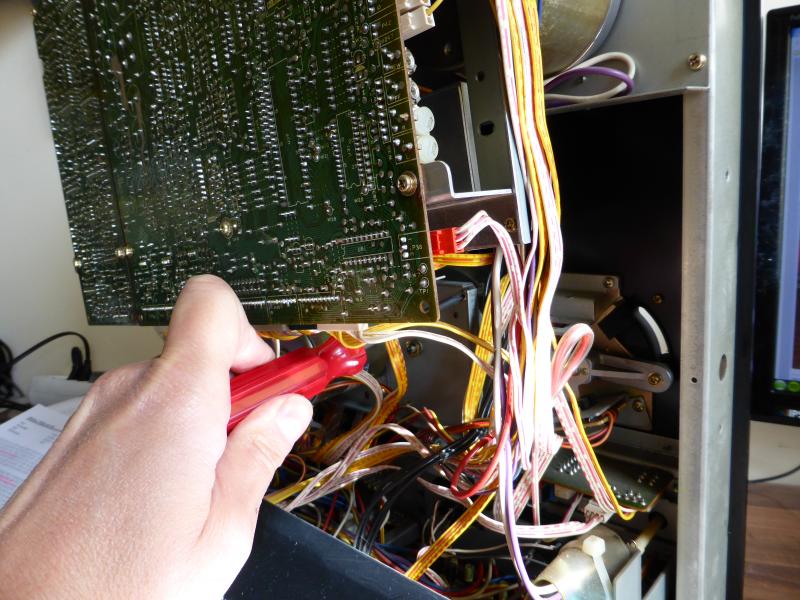 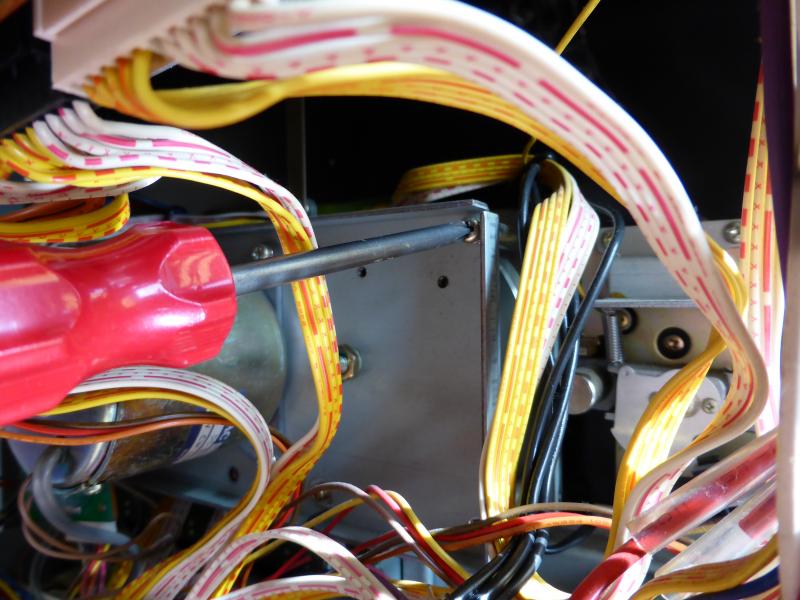 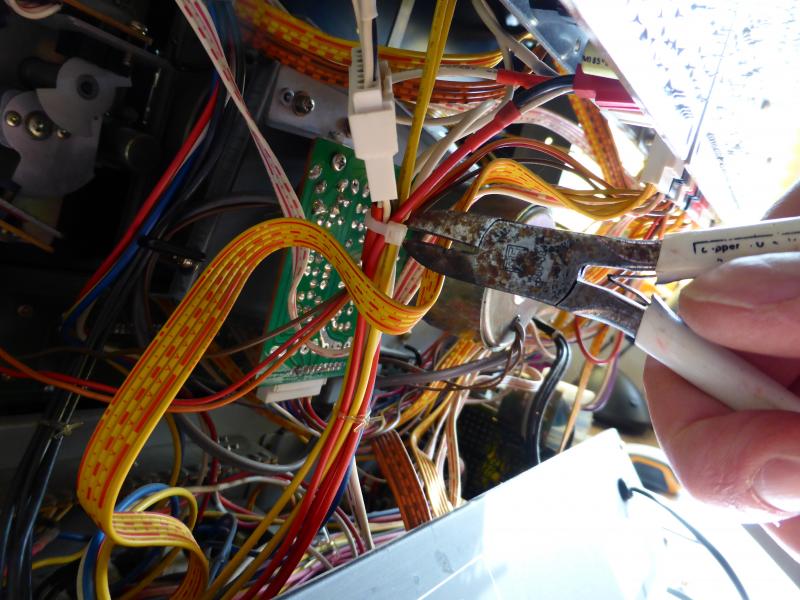 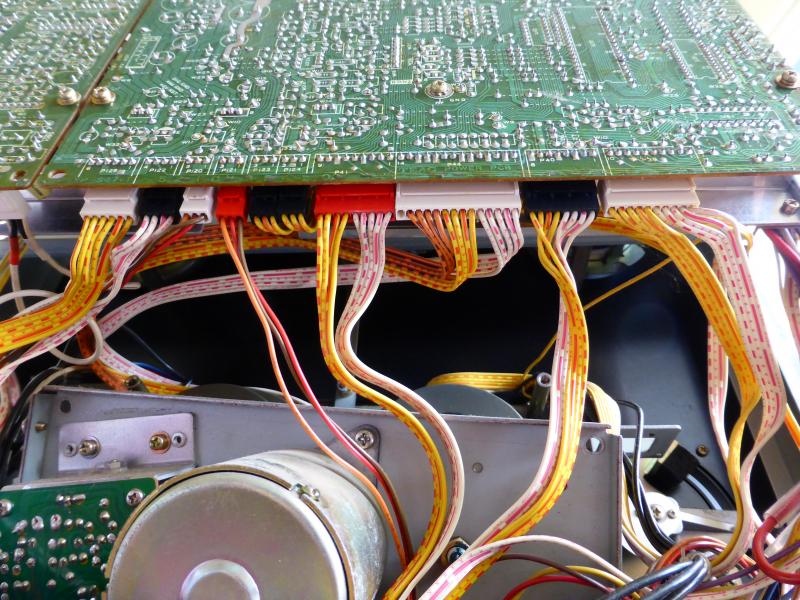 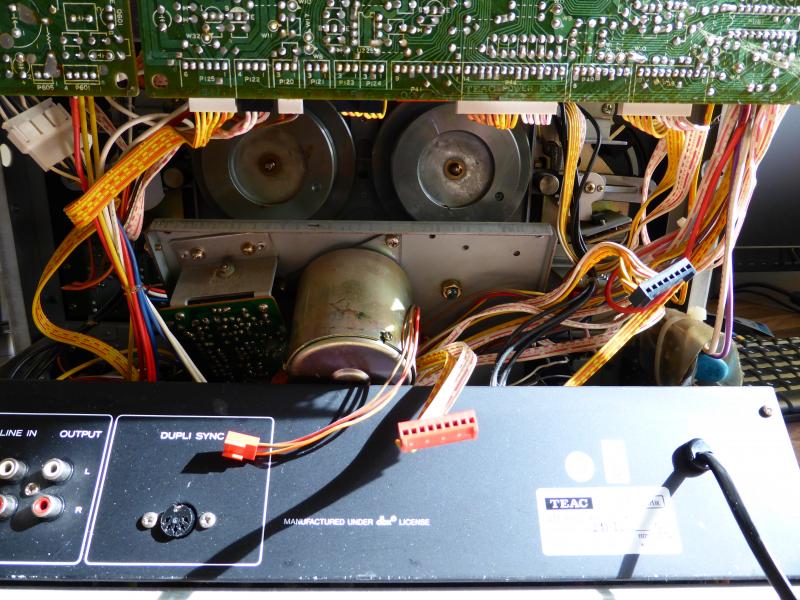 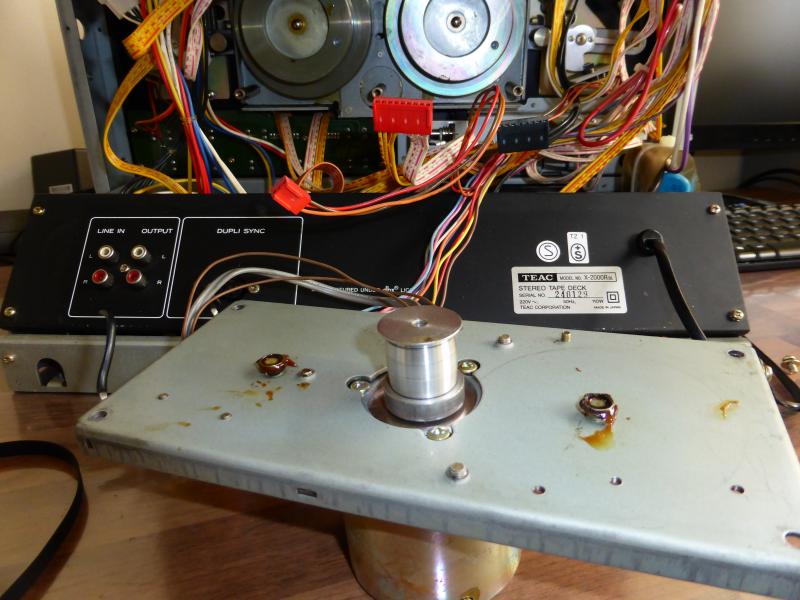 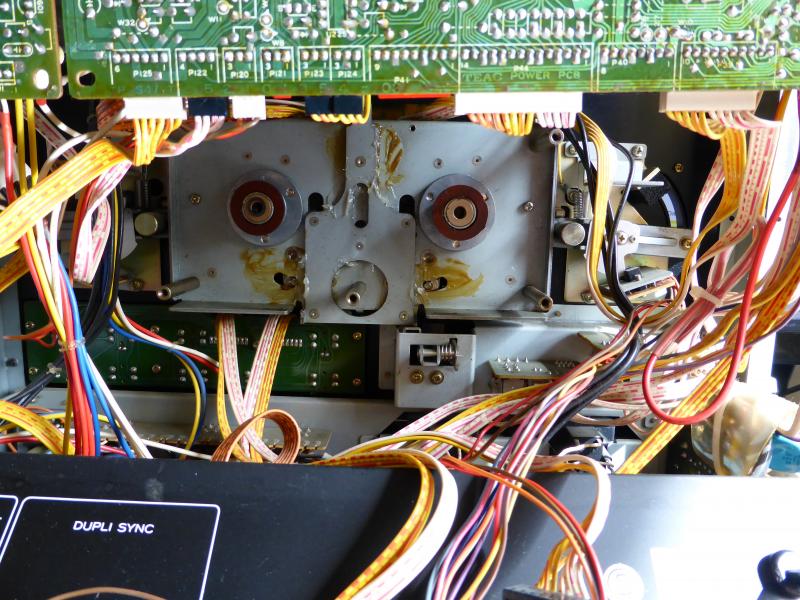 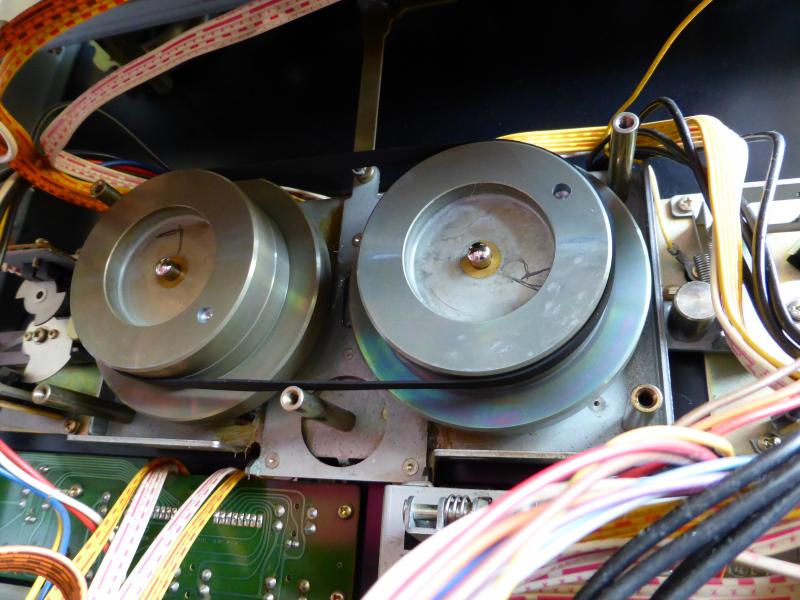 Unfortunately this was not the solution that fixed it completely, although the situation improved a bit. Even increasing the tape tension to incredible heights (or incredible lows) did not fix it. So I went online to find a solution.

Several fora messages suggested that everything in the tape path was relevant to my problem. From tape guides, to the rubber idle rollers, to lubrication of the tension rollers, to the state of the rubber of the pinch rollers. From the tape tension to the smoothness of the tape in question. It seems that everything was related to weather the dual capstan principle would function correctly.
So I soaked the pinch rollers in detergent for one night. The rubber was much softer and grippier after that treatment. Again, a little improvement, but no permanent fix.
I switched the pinch rollers from left to right, to see if that would improve the situation. No way.
I lubricated all the moving parts, I installed the little O-rings that were required for the rollers to function correctly (expensive little buggers!). Still there was no definitive solution that worked all the time.

In April I went to a meeting of fellow tape deck enthusiasts where there was an opportunity to work on decks. I tagged the deck along, and fortunately there was an expert who was willing to take a look at the Teac. Immediately he found one problem: I had put the tape tension way too high. We measured more than 100 gr. when 50 was required. He used a Tentelometer, a very rare instrument which he posesses. It looks like this: 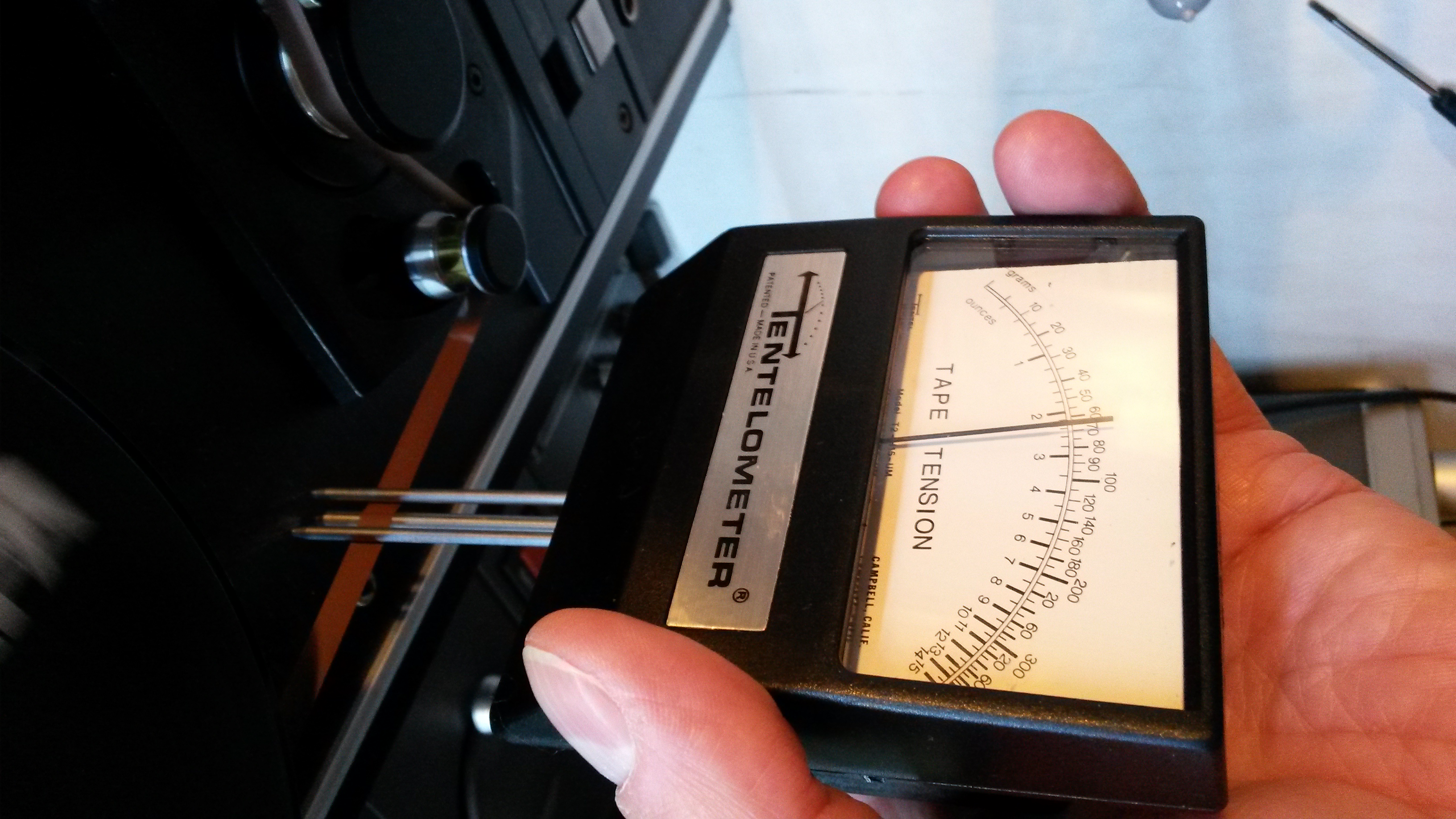 After we adjusted the tension to 50 grams, the tape handling was still not good. In fact, it was worse. Then, the guy helping me thought the problem might be in the capstan motor, of which the carbon brushes would have degraded over the years resulting in less powerful drive. So, on the fly he opened the capstan motor, removed the old brushes and (he had them available) installed new ones. 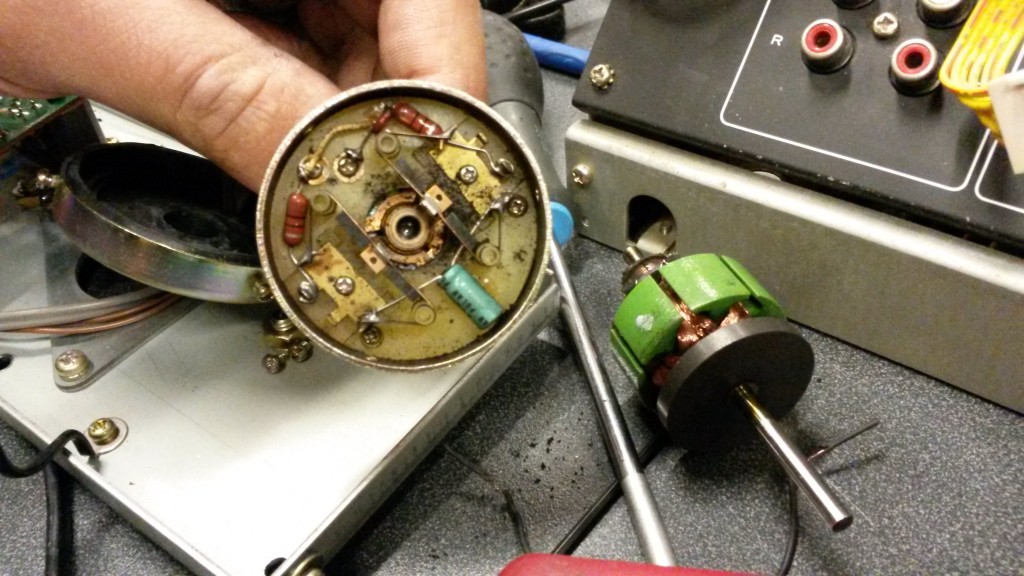 After this, still no good. But I had new carbon brushes! Jeey!

At the meeting we came to the conclusion that maybe the new belt I had put in was not an original Teac spare part but a fake. So I went to an official Teac repair center and got myself an original Teac approved belt. After I installed that belt, still not any better. Grrrr.

Eventually, as a sort of last resort, I took the Service Manual and went through all the mechanical adjustments mentioned there. Some I could do, some I couldn’t. For instance, I haven’t got a spring scale necessary to measure torque. And then, finally, after I adjusted the pinch roller pressure to a much lower value, it suddenly all seemed to come together.
When I adjusted for a very, very low pressure of the pinch rollers on the capstans, even to the extend that I could very easily stop the tape when playing, the tape would indeed run fine along the heads and reverse play was no problem. So I adjusted for a little more pressure but anyway now it works great and I haven’t got any more tape issues.

After that, I planned to calibrate the deck. This also proved to be not as easy as I thought. The service manual mentions a lot of steps and I think I did them all 4 or 5 times. The problem was that the record calibration required EE or Chrome tape, which I did not have. Fortunately I could borrow a Maxell XLII tape from a friend.
Bu after I calibrated the deck using the EE tape, it did not sound good. The level was way too low. And when I recorded at a higher level, the amount of distortion was unbearable. Something was not right here. After advice given to me on my favorite forum, I used normal tape to do the calibration. It still wasn’t to my expectation. I’m not sure what fixed it, but I repeated the calibration procedure several times, and after that I found the recording to be very good!

So the deck was performing as it should, reversing as it should, handling tape as it should and now I was to test it with EE tape and with the dbx noise reduction and dynamic expander on.
The result was, well, as close tot the original sound as you can hope for. The high tones were beautiful, and the sound was quiet as a CD. Out of nowhere the music starts. This is tape technology at it’s finest. I am very happy with my new tape deck.