I like measuring. So I bought a National Distortion Meter. It is the VP-7701a.

This device is capable of measuring the distortion of an sine audio signal. And can be useful to calibrate vintage audio equipment.

So in order to do that I need a pure sine wave for input. The device does not provide that, at least not one that is available to the user. The device measures the distortion by subtracting its own sine waveform from the one that is being measured, and the result should be zero. But only if the supplied waveform is 100% equal to the internal sine waveform. My search for a matching waveform therefor brought me to 3 sources: It has all kinds of tests on it: frequency sweep, fase checks etc and also sine wave tones across the audio spectrum.

This is the result of my base line tests: 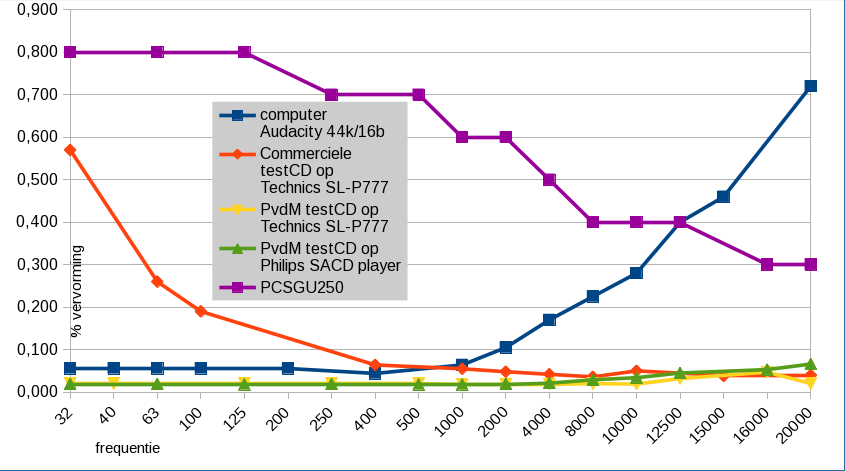 The results show that both my soundcard and the commercial testCD are useless for my measurements. The CD that I made myself is a lot better. It performed marginally better on my Technics SL-P777than on my Philips DVD 963SA player (SACD). The result is such that I think that the base distortion is low enough to not take it into account when I start to measure real equipment. So I will be using this CD as my source for sine waves.

One side note: my CD is recorded at 0dB level, so the player outputs 2,5V which is rather high. I may have to make a second CD where the levels are lower, like -10 or -20 dB.