I have recently acquired a Tandberg TD 20 A.

This model was on my list of decks that I always wanted to own. It is a very good sounding deck, and received wonderful reviews in it’s days. It was compared once to a Philips N4520 and a Teac X-2000R in a magazine article and it came out 1st in some of the sections. I can not find the article at the moment, if I find it I will post the link here.

It is a deck from Tandberg, a Norwegian company. Not many decks came from Scandinavia, apart from B&O and some others. This deck is also available in 2 tracks, maybe I will come across one someday, I hope.

This deck came as ‘mechanical defect, does not run but signal in/output is good.’ So it will be a challenge to get it working. It also came with 2 very special Tandberg NAB adapters. 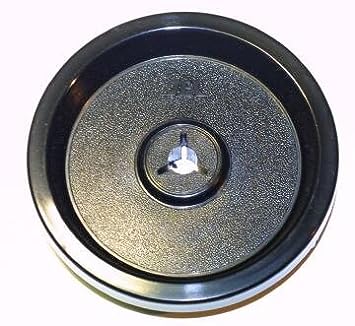 First it will need a good cleaning. Especially the front aluminum is yellow-ish.

First I took the deck out of its casing. Then I took of the knobs and the front plates. The knobs were cleaned, and fortunately on the front plate the lettering does not come off! The black upper plate looks nicer now too.

It powers on: good. It winds: good.
But it does not play. It appears the pinch roller, or better the arm on which the pinch roller is located, is stuck. This looks like a bad case of stuck grease.

After disassembling some parts, including removing a split-pen, I was able to remove the arm. I removed the rubber roller and put it into a detergent solution for a night to revive it. I cleaned the axle from old grease and lubricated it. Now it moves again effortlessly. I checked, cleaned and regreased all moving parts. Also the gears on the 4th motor, that manages the tape handling, were stuck. Cleaned and lubricated that as well.

Then another issue presented itself: the left reel dish was scraping against the brake. I readjusted that table so that it is in the correct position again.

Cleaned the tape path and the heads, made sure the tape guides were smooth in their movement.

Then I put a tape on: it was working! This deck has a very smooth tape handling when starting and stopping. It is a delight to see this in action. Also the music on the tape was playing, so playback circuit was working too. This keeps getting better and better.

I noticed something odd: the erase head is not in the position that it should be: it is slanted and it’s position is too low on the tape path. Apparently the construction on which it is mounted was dented once. This is an issue for later. Now I will just use my bulk eraser to erase a tape and record on that.

I put on some Agfa pe36 (which is not a very high end tape, but als not budget – a kind of ‘well, ok’ -tape) and the difference between source and tape was almost non-existent!. This is a very good deck as-is even without the maintenance, adjustment and calibration that I will perform on it.

The matching NAB adapters have 2 peculiarities:

The tape guide arms can be adjusted to bring the tape lower to the reels, but I will not do that as I suspect trouble with 7 inch reels.

There is a strange thing going on with the erase head. This is the very first time that I experience a skewed erase head. And it is not only skweded but it is also too low.It looks like it has been pushed down. The construction is weird: the head is mounted on top of a kind of tincan strip which is Ω omega shaped. And that is dented. And while pushing it up again, one side broke.

What I did was load some blank tape, and by that I mean see-through tape, and line up the erase head. I put some nuts and ring under the plate until it was level with the tape. After adjusting the other mounting screws of the head my erase head was level again and at the right height etc. I tested it with erasing and it seems to work just fine. And I could always use the deck for playback only. Or first bulk erase the tape before recording with this deck when it won’t work after all.

After all the mechanical adjustments were made, the unit was cleaned, lubricated, demagged, etc etc I ran some tests to determine how well the deck was performing.

DIN measured. The values still match the specs quite well!

Then I proceeded to measure the frequency response. Although the deck sound very good, what I saw on the screen I wasn’t very happy with: Yellow line is the source sweep, from 20-20kHz and measured through the deck in ‘source’ mode, and the green line is what comes back from that same sweep in ‘tape’ mode.

I was sure that could be improved upon, but I wasn’t sure what was going on. It could be that recording was the problem, or playback, or both. So I mounted not one, but two (!) calibration tapes to examine the playback frequency curve. The result was this: 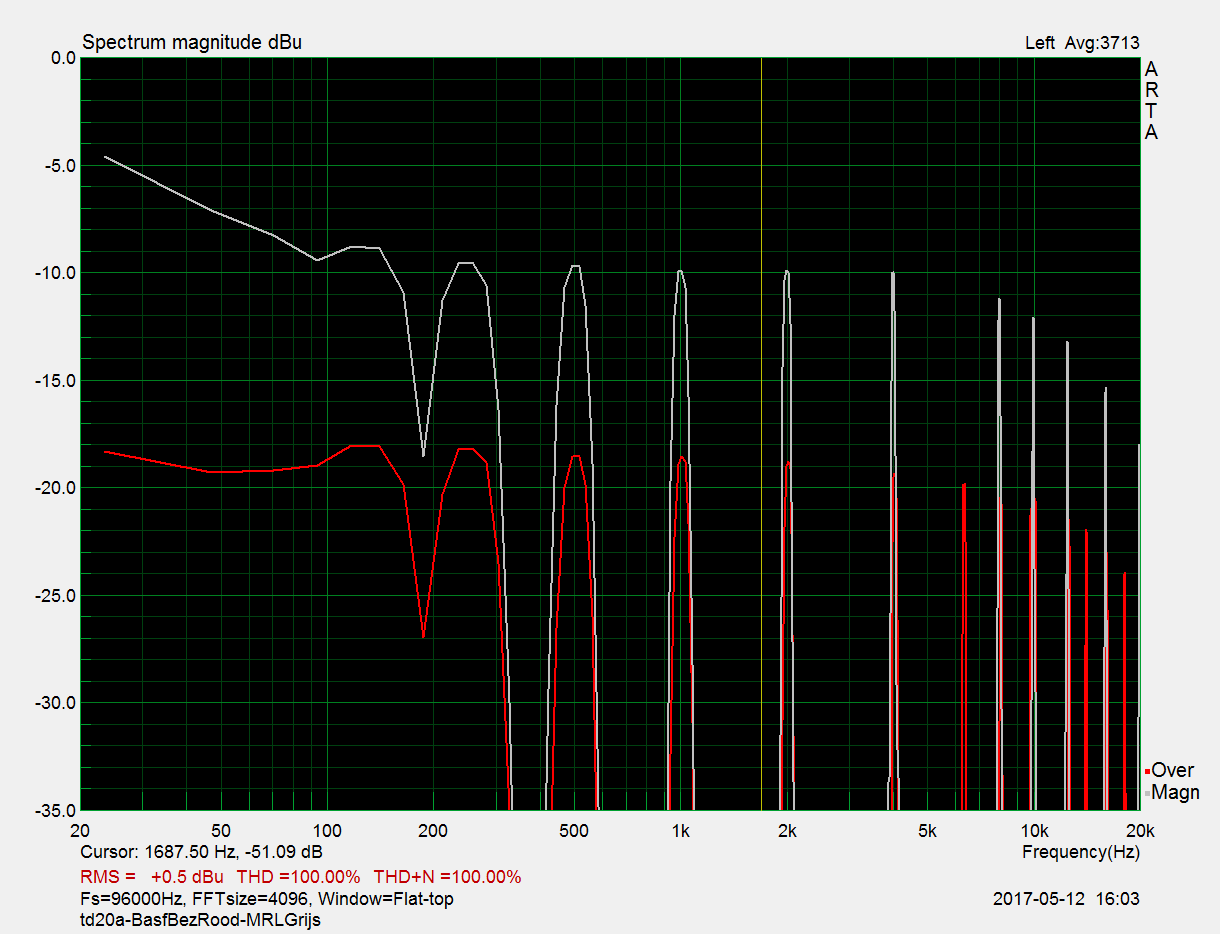 The red line is a BASF Bezugsband and the white line is a brand new MRL tape. Apart from the difference in levels, which is solely for the purpose of the graph, the frequency run is fairly identical. There is fall off in the higher frequencies on both tapes. So there is a problem with playback at the least.

REMARK: the BASF tape is IEC, the MRL is a NAB tape.

I continued to go through the complete Service Manual of the deck. Starting with heads alignment, that already gave some better high frequency response because you not only align the playback but also the rec head.

After that I followed the rest of the service manual and calibrated the levels, the bias and the freq. curve. After I was done, the result was spectacular: 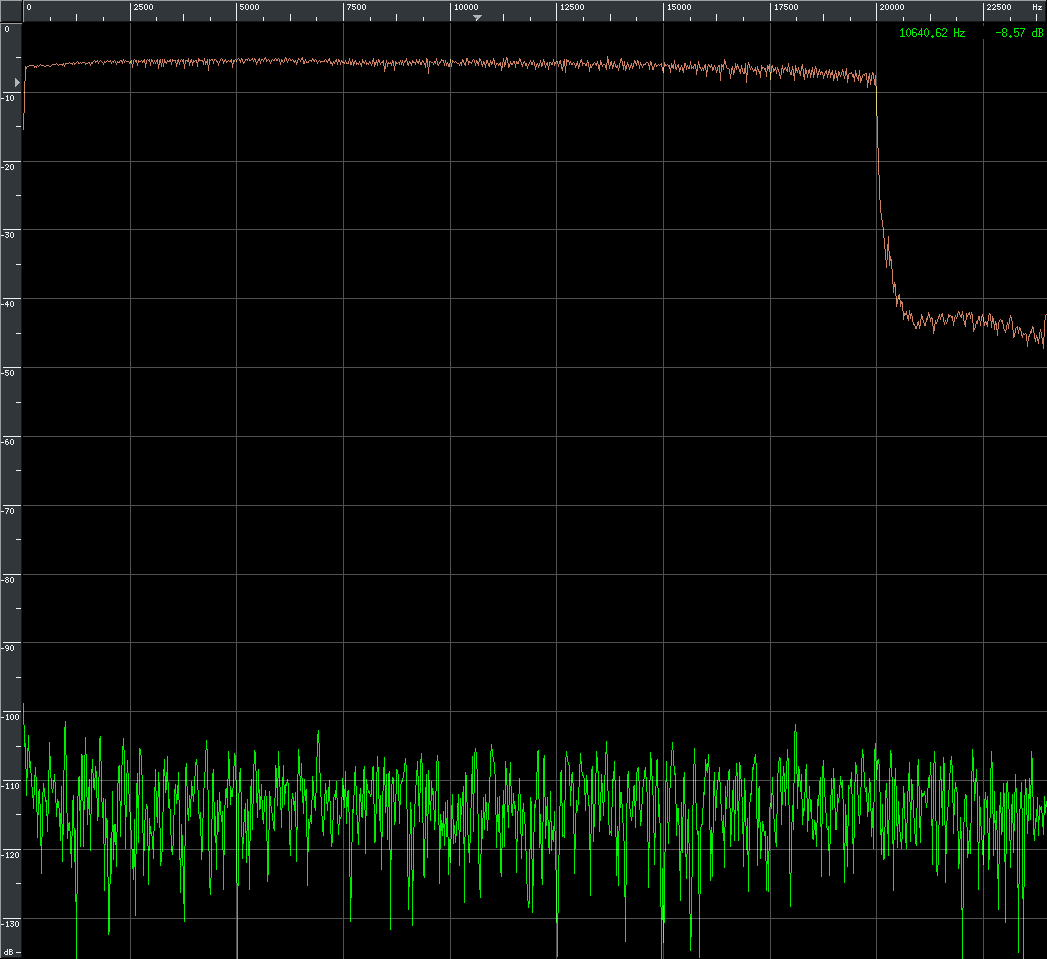 This is a recorded signal played back. The sweep is almost straight. At least as straight as I will (can) get it. The image comes from a new program that I found called BAUDLINE. It runs on linux and is very fast. I use the ‘peak smoothing’ feature to create a sort of peak-hold.

After that was done, all the work I planned to do on it and that was necessary on it was done. The subsequent listening tests were a revelation: the deck sounds so good that even my trusty old Philips N4520 was left a bit behind. May need to rework that one as well sometime 🙂

at the moment the frequency curve when playing the BASF Bezugsband is like this: 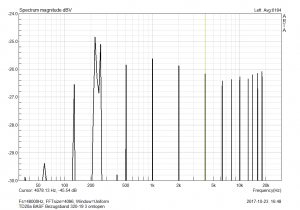