My new addition to the collection is already a few months old, but here is the blogpost anyway.

It is an AKAI 1730D-SS Quadraphonic tape deck that I received from the first owner.

[picture shamelessly stolen from the internet]When picking it up I tested the deck and only 2 of the 4 channels worked. Only the REAR. Strange. And one of those 2 channels failed intermittently.  When I got home I opened up the deck and had a look at it. I put on one of the many quadraphonic tapes that came with the deck. Quickly I found out that cleaning and fixing the 2ch-4ch switch solved that problem. That was easy.

But the FRONT channels still did not work. At all. No sound, no noise, no click when the deck was powered up, no nothing. I sure hope the playback amp hasn’t died. It appeared there are 4 audioprints in the machine, see picture. At the left of the picture you see the 2 playback prints, at the right the record prints. Each print is stereo. FRONT at the top, REAR at the bottom. 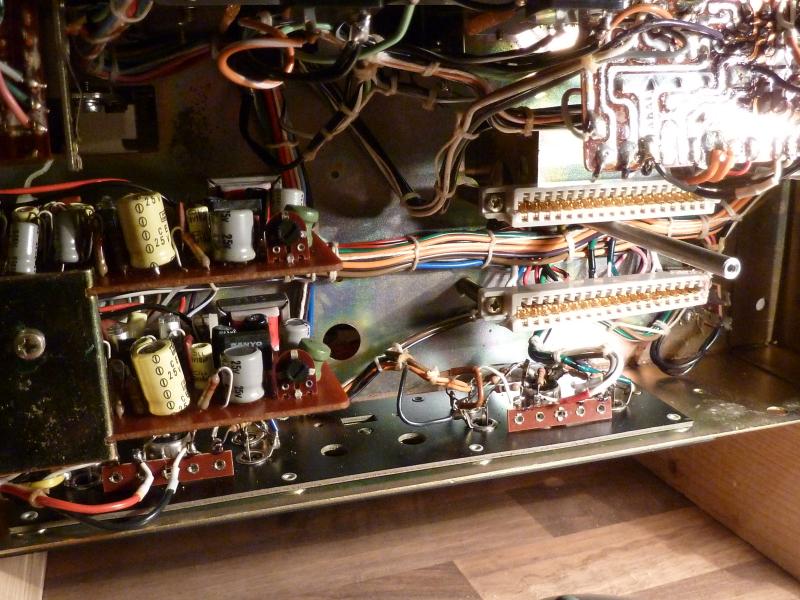 [picture showing the 2 right audio prints removed from their slots]

By turning the pot on the prints I found out wich print was unresponsive (I am going to recalibrate it anyway, so that did not matter). I took it out of its slot for further inspection. 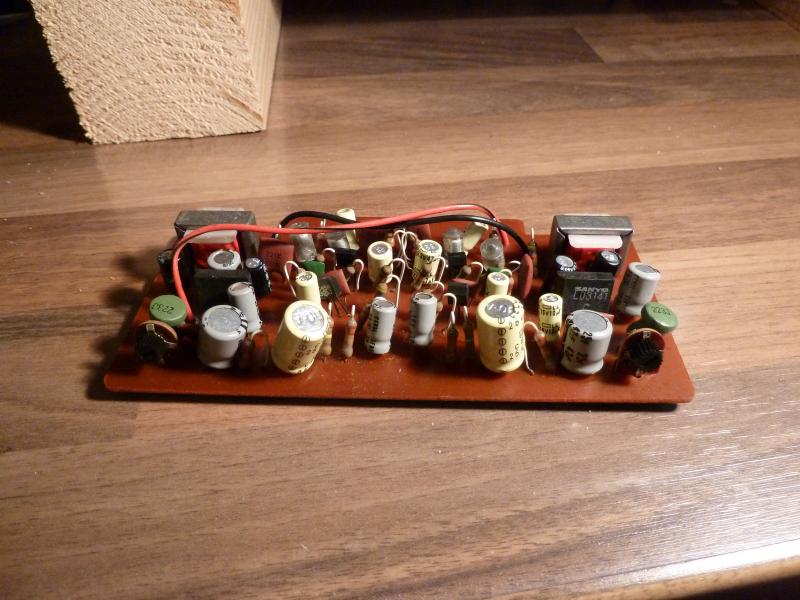 Unfortunately I could not find anything wrong with the print or the components. No burned components, fused caps, burn marks, loose contacts, nothing. I was beginning to feel that I was reaching the end of my knowledge because I have not got expert knowledge of electronics.

When I was going to put the print back into its slot, I noticed something odd about the slot. The slot is a kind of very crude ISA-style slot type, like in the first IBM PC. I saw that the plastic of the slot was broken! That caused the print to not make good contact with the pins in the slot. See the pictures. 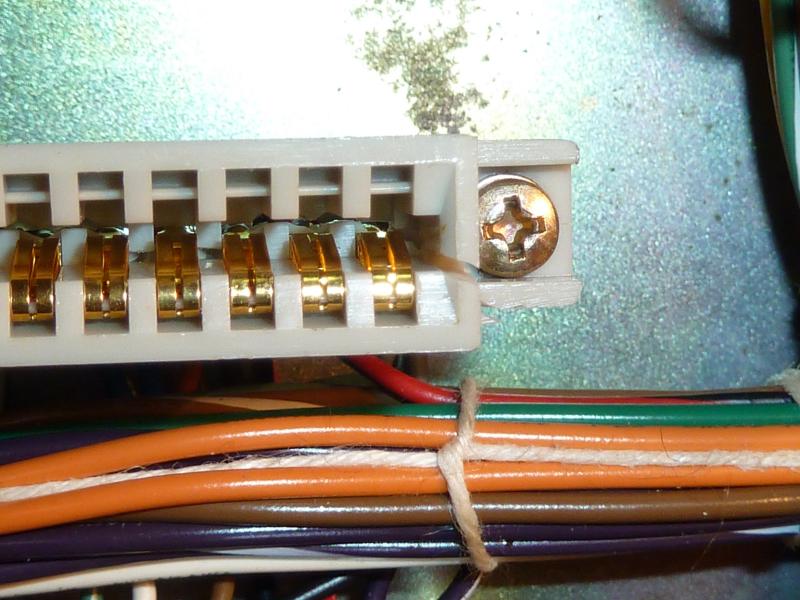 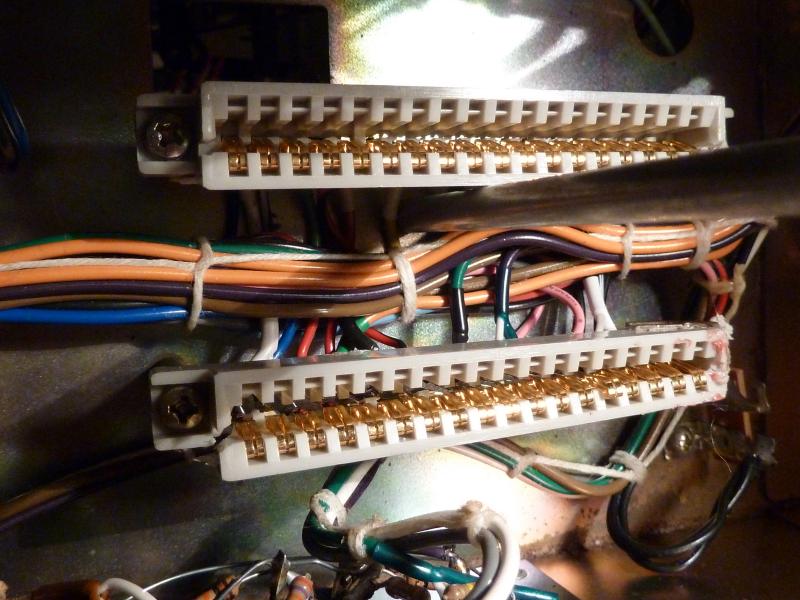 When I carefully with my hand pressed the slot so that the print made contact, everything started working! Eureka! ‘There, I found it.’

Now how to fix it. Glueing was no option. I soon thought of a tight tie-wrap, that might do the trick. I pulled the tie-wrap as tight as I could. See the pictures. 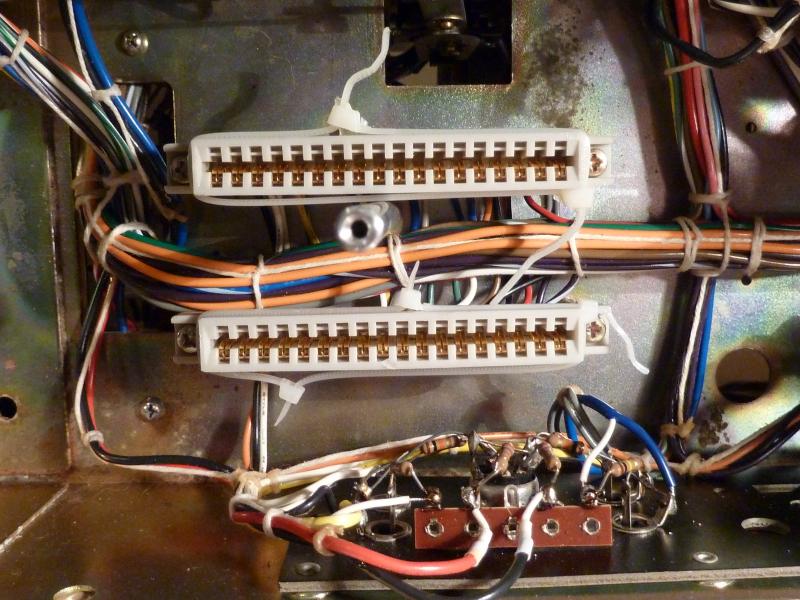 Then came the next issue. The deck did not want to record at all. I soon found out that the other slots were damaged too (duh). So another set of tie-wraps to the rescue. I put tie-wraps around everything and reconnected it all.

It worked ok, but not reliable. Even when just looking at the recorderprints weird effects on the signal were noticable. First I doubted my tie-wraps, but that solution DID work reliably at the playback prints. Just to be sure I sanded the contacts on the prints and voilá: everything worked flawlessly! So I put the print in and secured them thoroughly. ‘There, I fixed it again’

This is a machine from the early seventies, that has been idle for who knows how long, and I’m surprised at the audio quality.

Now I need to demag it, and calibrate it. Then it will probably sound even better!

[edit]
Although it sounded good at first hearing, further test revealed there was noise in the left front channel ,even when it was not playing. Same on the right rear.

So I replaced the 2sc458 transistors on all the audio prints. After that, I eagerly turned on the machine.

No signal at all!

Remember that I am only doing this as a hobby, I am not a professional guy and I know very little about electronics.

They simply needed to be turned around, so that was relatively simple. I did not need to cross their legs.

After that it worked again, fortunately! Apparently these guys can withstand some rough handling haha. And the best part is, that the deck is silent again now, the noise is gone. I recalibrated it and it sound great!