A box of DCC tapes

I have lying around a box with +/- 50 used DCC tapes that I purchased a while ago. DCC is the Digital Compact Cassette, invented by Philips. I have gone through them all, I listened to some of the tracks on each tape and sorted which ones I wanted to keep because of what was recorded on it. But most of them could be recorded over.

In my youth I had the privilege to experience the evolution of the compact cassette (CC), also a Philips invention btw. It had just made its way from dictafoon-like devices to the hifi/consumer audio market. And I witnessed its rise to a high end audio device (Nakamichi et al.). I have lots of CC tapes, probably my entire youth is recorded on those.

Then, in 1992, DCC came. But by that time, I had lost interest in recording music, or audio as a whole for that matter. So I never really noticed at that time. Also the Sony Mini-disc and DAT recorders went completely past me.

But when I rediscovered my audio hobby around 2010, I got very interested in these three now obsolete recording techniques. And fortunately you can get these devices rather cheap these days.

I have all three devices now.

DCC surprised me in a very positive way. I got the same, familiar feeling playing cassettes that I had back then and that I had gotten used to. Also the deck that I got feels very solid and tape handling is direct. The DCC cassettes themselves feel very, very well thought about. Even the casing and the jewel box is outstanding well designed, even more so the prerecorded tapes.
On top of that, you get CD like audio quality. I say CD like, but I dare you to hear a difference. I was very, very impressed with the whole concept. In hindsight I wish I had used it back then.

I noticed when I went through the lot of old tapes however, that some of the DCC tapes were making a squeaking sound when they were played. And some of those would not play at all. The deck, just kept clicking, the drive mechanism reversing a few times, before finally giving up. So I thought that these were bad tapes, or maybe they had some shedding or sticky tape or whatever and that they could not be relied upon. I was resolved to throw them away.
It was clear that it was the tapes that were the problem and not the deck, because most of the tapes would play perfectly and the problem ones would not.
I did some research into cleaning the head of the deck, but found out that this was not a trivial task, and that the fragile head could easily get damaged. The general conclusion was that you don’t clean it, unless it is absolutely necessary because all tapes play bad and it is clearly visibly dirty. So I didn’t.

I researched some more and came across a post on a Dutch forum dedicated to Philips equipment. You can find the post here:

although I think you need to register first. And it is in dutch 🙂

It is described there that there are actually 2 problems: the squeaking and stuck tape. The squeaking problem is related to two pieces of felt that are inside the DCC cassette, not visible from the outside. There is also a third piece of felt, this is the familiar one that presses the tape on the head. The 2 problematic felts are located near the left and right rollers located inside the cassette: 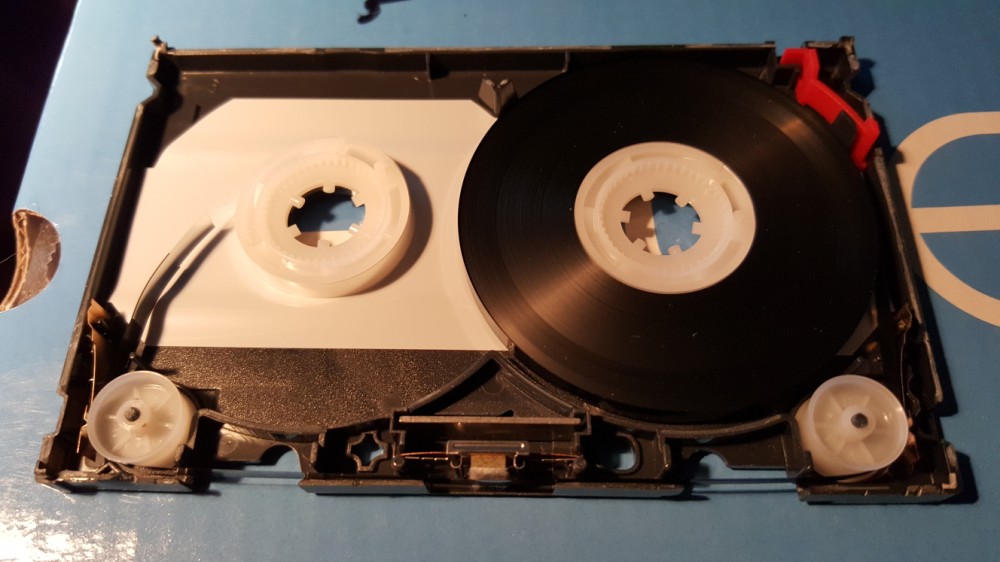 These felt pads leave behind a greasy spot on the backside of the tape when the tape is not used for a long time. The deck has trouble running the tape past these spots and finally gives up. This spot is somewhat greasy, but also a bit sticky. This can be observed by pulling the tape somewhat from the cassette and checking the backside. It is not necessary to open the tape casing for this. 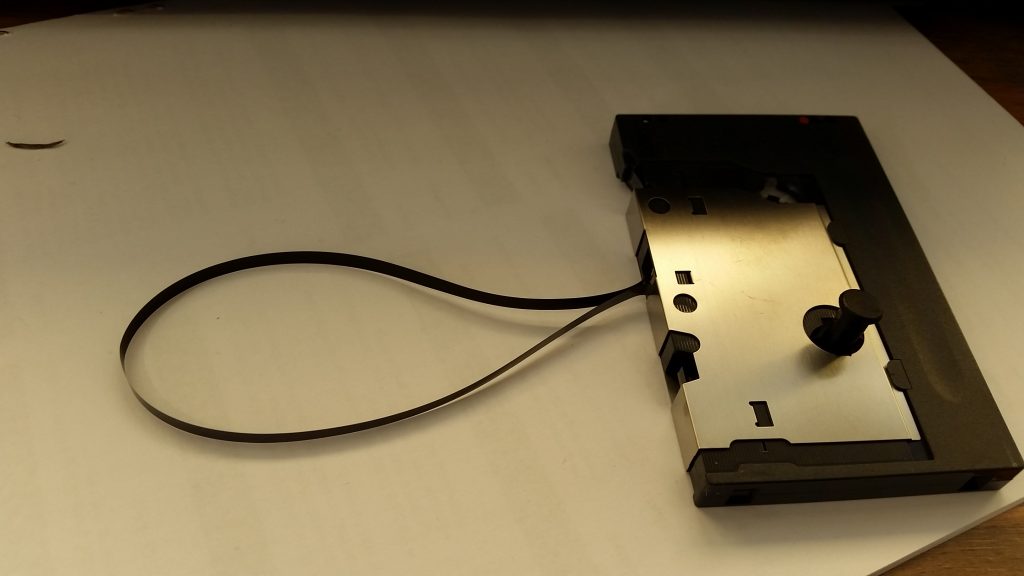 In order to do that, you must pull back the sliding cover and pull the tape out very, very gently with a small tool and make sure that you do not damage or crinkle the tape. You can see the gunk if you look very carefully. Let light shine on the surface. Make sure that the tape is at the problem spot when you stopped the deck and pulled the tape out, from BOTH reels.
It was impossible to make a good photo of this, so you will have to look for this yourself.

In order to clean the tape, make sure you gently use some non residu cleaner, like IPA or alcohol or videospray cleaner 90 or whatever fits you, and gently rub the problem spot using a cotton swab. Hold the tape down while you swab, careful not to damage or wrinkle the tape. That happens so easily! Remember it’s the backside of the tape.

After that, let the tape dry for a moment, simply wind the tape back inside the housing and play the tape. Voila! It’s working again!

For the squeaking problem: I fixed this by cleaning the felt located opposite the head as well. It won’t get completely clean, but just try to clean it as much as possible. I did it with a cotton swab with IPA. Just rub it a lot and also twist the cotton swab over the surface of the felt. Let the felt dry, this will take some minutes, and wind the take back inside.

After that, the squeaking was gone.

All info and the picture of the open DCC cassette are from the forum mentioned.