For some reason I got interested in the speed of my tape decks. Why, you ask? I really don’t know. I was fiddling around with my vintage Philips multimeter, which is capable of measuring the frequency of a tone, when I thought it would be cool to use that meter to measure the 1kHz tone which is a the beginning of my (generic) calibration tapes. If the tape runs too fast, the measured frequency would be over 1000Hz, and if the speed was too low, it would be under 1000Hz. Suddenly I was fascinated by the fact whether my decks were running at the exact speed or not, or if not, how much deviation it had.

Now, you have to understand that I do a lot (well, actually not that much) calibrations of decks, but I never ever calibrated the speed. I never bothered before. I never had a problem with speed before. I never had the need to adjust the speed of a deck. So whatever I measured now, it would be the ‘default’ speed, untouched.

So I loaded the test tape onto all of my decks, connected the multimeter, and did my measurements.

The results were sometimes surprising, sometimes more or less expected.

And a graph says more than words, so: 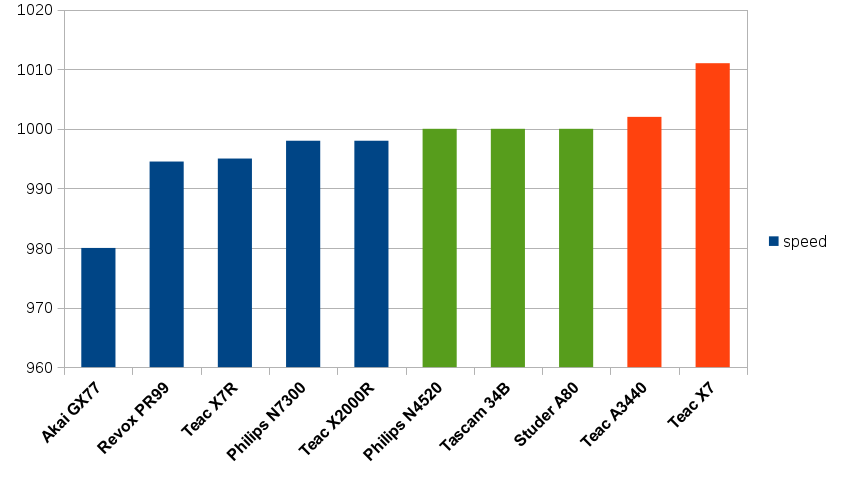 What can we conclude from this?

enter the wow and flutter

So that has been a very interesting experience. But then I started thinking about variations of the speed, also known as ‘wow’ and ‘flutter’.

One can experience wow then playing a record where the hole is not centered, and the speed goes up and down all the time.

Flutter is more difficult to hear because it is so fast. It can be measured however. Flutter is created by faulty mechanics: a capstan here, a roller there, dirt, bearings, the overall construction etc. It would appear that less flutter makes for a more tight and clean sound.

There is always wow and flutter. No mechanical system is without them. It is just a matter of reducing it as much as possible.

what are the causes of W&F? There can be many. The capstan or axis involved might not be perfectly round. The bearing idem. The system may not be perfectly lubricated. There may be dirt on tape guides, causing jerky tape motion (on a microscopic scale). Tape may not be slit evenly. Etc. etc. etc. There really are too many to mention here.

Remember: There is always wow and flutter. No mechanical system is without it. Realize that.

Now there I had a problem. To measure W&F you need a special device called a ‘wow and flutter meter’. Of course, you can rely on Philips that they had such a product back in the days. They did. It is this one: 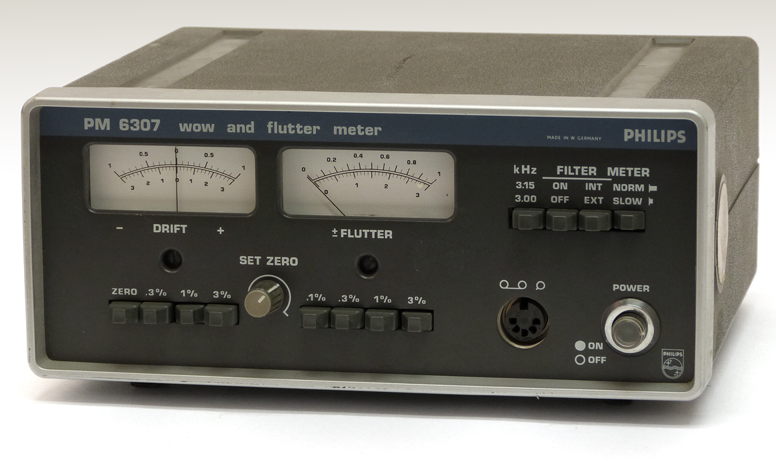 But unfortunately I don’t own one. It is on my wanted list though. They are relatively rare, and sometimes expensive. If you have one, or one like this, and you would like to sell it to me, please let me know.

software to the recue

What to do now? Fortunately I found an interesting program on the web that is supposed to measure W&F. It’s called WFGUI. Here is a screenshot of the program in action: 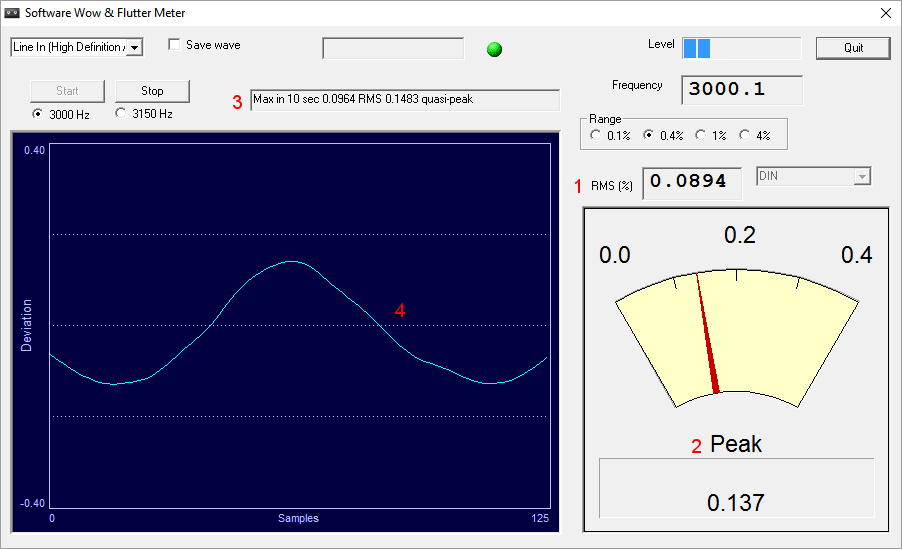 That looks impressive, right? It can measure DIN 45507, wow < 6Hz, and flutter >6Hz. According to the documentation provided with the program it has been tested against some real life hardware W&F meters and the results were very very comparable. Good!

Now I had a different challenge with this program, as it runs on windows, and I only have Linux. But, I soon found out that it runs perfectly fine in Wine! Yeah!

You can select between the 2 most used frequencies in calibration: 3000 and 3150 Hz. (It also shows the measured frequency for your convenience.) Then there are 3 values to take notice of:

Now I will not go into too much detail here, but take it from me that the DIN norm is a sort of average between the 2nd and 3rd setting, i.e. it takes a little bit of both. If you want to know more, you can read the documentation that comes with the program, that has some nice graphs that show it all. That will explain everything. For my measurements I used all three settings (DIN, wow and flutter), and I measured all 3 values (RMS, Peak and Max RMS)

The problem I had is that measuring these kinds of W&F is traditionally done with a tone of either 3000 or 3150 Hz. And, more specifically, you need a special (and expensive) speed calibration tape with that tone on it recorded in a very precise manner.
Guess what, I do not own such a tape. They are quite rare actually, although you can still buy them at MRLtapes.com I presume. My regular Bezugsband (German for calibration tape) has a 1kHz tone at the beginning, but that is used foor reference level measurements.

making my own test tape (huh?)

So I thought about it a bit and I knew I was never going to buy that special speed calibration tape (>€130). What if I took my trusted tone generator and used that to record and immediately playback a 3kHz tone? Of course that would be an imperfect recording, because it would contain W&F, but wasn’t that just what I wanted to measure? And if you play back that recording on the same deck, doesn’t that give a good indication of the performance of that deck? The more I thought about it, the more sound (pun intended!) the idea seemed to be.
Doing that would mean that I could not refer to a know calibrated source anymore. But I’m not interested in those figures. I can now compare the performance of my decks between themselves, see who stands out, either way.

Some people may argue that one can not make his or her own test tape. Of course that is true. But that is not the purpose. I want to measure the W&F of a deck. I was going to use the deck itself to record a tone and play it back at the same time.
Some may argue that that is not a good way to measure W&F. I disagree. I will explain.

When you record the test tone on the DUT (device under test), it wil will be recorded with wow and flutter. That is clear. So it will be an imperfect recording. So what. That is what I want to measure, so that seems ok to me. Let’s assume that the recorded tone will contain at the maximum an amount of W&F of n. If you would examine the tape in a laboratory you would find max n W&F. The DUT obviously has a W&F value of n. So at some points in time the value would be 0 (zero), at some points in time the value would be n (the max value) and most of the times some value in between. This will vary constantly, and it will vary very quickly.
Now I play back this tape on that same deck that has that W&F reading of max n. So again, some of the time that tape will play back with no W&F, and some of the time it will play back with the maximum value of n, and most of the time some value in between. The resulting W&F will be 2*n at the most, to be exact that would occur when a piece of the tape that was recorded at that moment with n W&F value will be played back at a moment that the deck plays back with a W&F value of n.

So again I dragged all my decks to the test bench and hooked them up one by one. Now reading the values from the program proved to be quite a challenge, because the readings vary a lot and change very quickly. So i took a sort of ‘observed average’ , as I would call it.

I did the measurement all at 19 cm/s, because that is the common speed all my decks have. I have noted where I used an other speed, like 38 cm/s.

So what are the first results?

After a lot of testing I had a spreadsheet full of values that were very difficult to interpret. So I made a graph out of all the numbers and this is the end result: 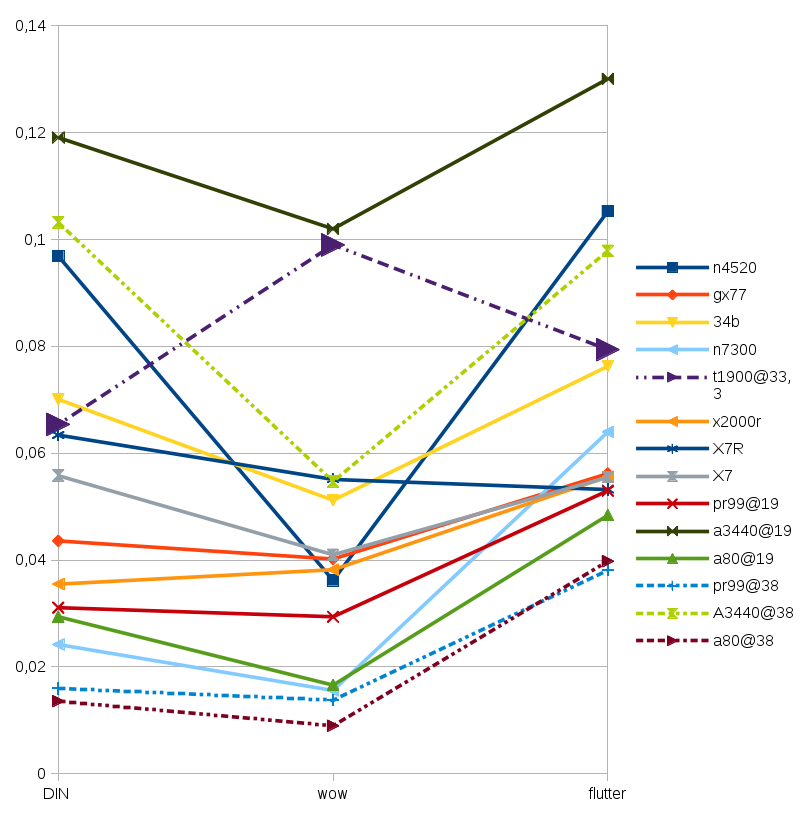 This may seem overwhelming and confusing at first, but it really isn’t. Let me clarify for you.

Here are the conclusions:

There you have it. I hope you liked my article. If you have any comments, please leave them below. 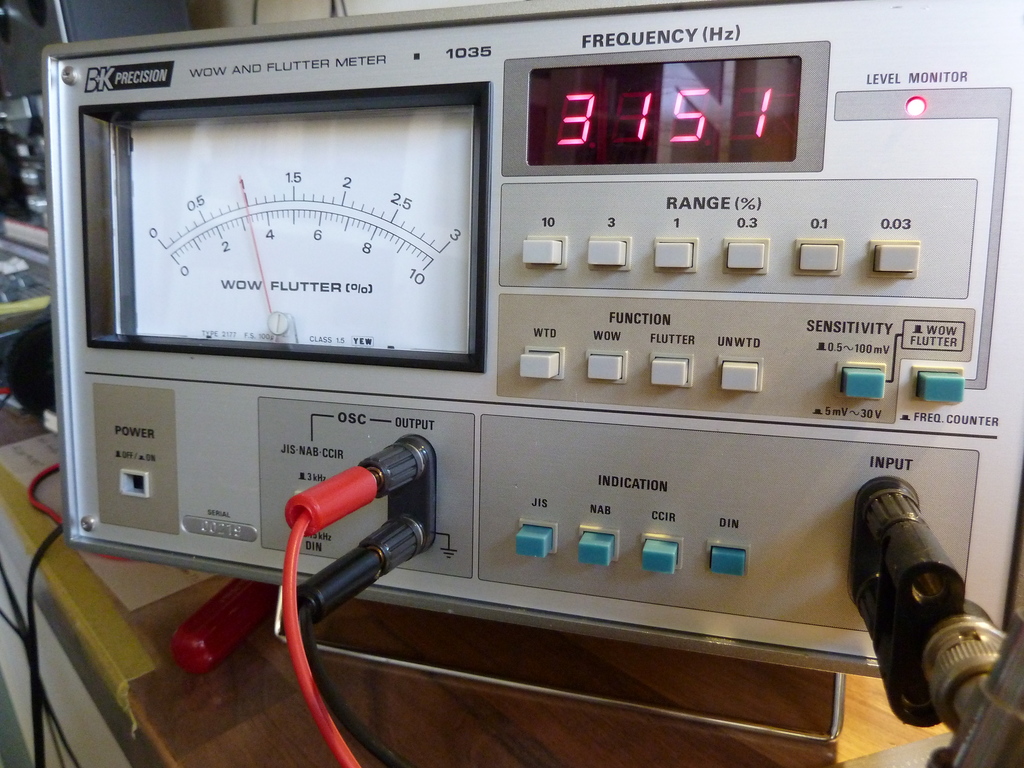 I have used this meter to check some results from the softwareprogram above, and the results fortunately match. Great!