The JVC, my first 8-track 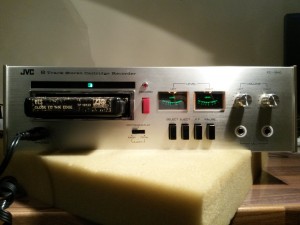 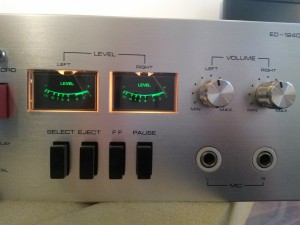 I possess one JVC 8-track player, the JVC ED-1240, a very nice and featureful deck.

The main reason I am interested into the 8-track world is, of course, the fact that aside from 4 track reel to reel tape, this is the only format that has discrete quadraphonic. I realise that the quality of the sound is not up to par like the Studer, or even a normal tape deck, but it will have to do 🙂

The first time I heard this 8-track deck i was very disappointed with the sound. So I found myself a challenge at hand. I have cleaned it, repaired it, refurbished the motor, changed the belt, demagnetized it, changed all the caps on the power board etc. etc. and eventually it performs quite well. 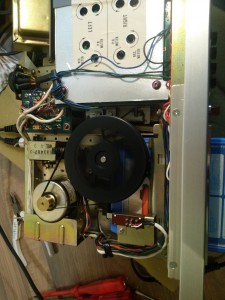 I cleaned and repadded the 8-track cassettes that I have. I even found it necessary to lube the inside axis a little bit to prevent squeaking and to lower the rumbling and the mechanical noises from the cassettes while playing. The end result is quite pleasing I must say.

But there are still some issues with the player, so if anyone has the schematics, or the service manual, please contact me!

But this post is not about this deck. The JVC is just stereo. This post is about a new one I just bought. A few weeks ago I ran, quite to my surprise, into a quadraphonic 8-track player from National Panasonic, the RS-845us. 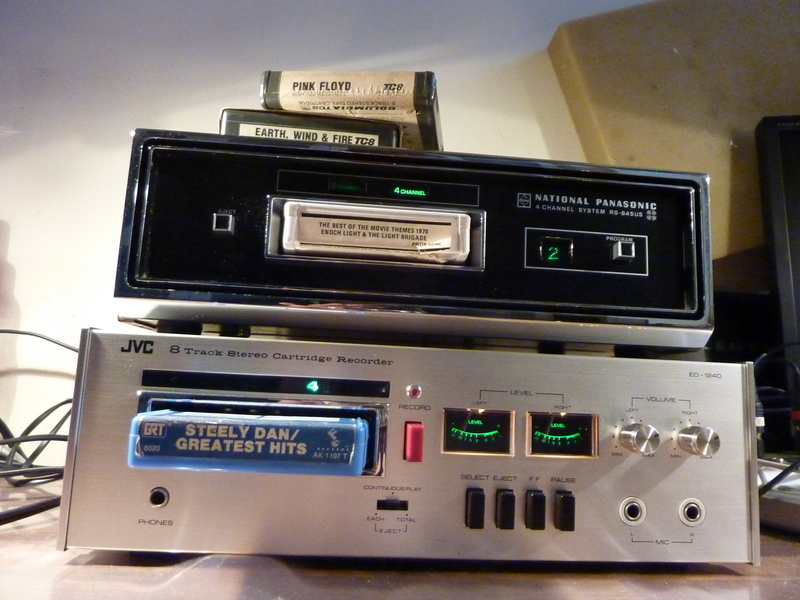 Here it can be seen on top of my JVC. At the moment the picture was taken, it was playing a quad tape as you can see by the ‘4 channel’ indicator light. In this mode there are only 2 programs, not 4 as you would find with a stereo tape.

But, alas, this player also came with its problems. I tested it before I bought it, and it was ok as far as I could test it at the time. Coming home, when I could test it for a longer period, I found the same issues I had with the JVC, like irregular tape speed etc. Also the sound was not as good as I was used to from the JVC.

So I did my usual fixup things, like cleaning everything, oiling etc. No good. I quickly found out that the voltage over the motor was dropping several volts at times. I suspected the power circuit board. So i tested the diodes, they were ok. I tested the caps and replaced them all nevertheless, although they were not really out of spec. Unfortunately, that did not help much. New belt. There was some improvement, yes. But still the voltage drop at times, from 12-13V all the way down to 6-7V. The motor would almost stop turning then. And it would squeak a lot.

The solution would be to open up the motor and fix it there. That is always a bit tricky but I did it before and I therefore have some experience with the procedure. It went surprisingly well. There was some dust (powder) from the magnets and from carbon brushes. I also scraped clear the spaces between the 3 parts of the rotor (I think it’s called) so there would not be any more shortage. I reassembled a clean motor and lubricated it. When I tested it it it ran very smooth and silent. Cool! The tape speed is also a lot more constant than before. Also the sound seems to have some more punch to it. Maybe it has to do with improved tape-head contact, or with a more stable power supply to the audio board due to the changed caps.

But I also have the capacitors ready for a complete overhaul of the audio prints. So somewhere in the next few days I hope I will find time to replace them and see if that will fix the muffled sound. I don’t expect a lot from that action, but hey, that’s what this hobby is all about.

Yesterday I did the recapping of one of the 2 audioprints, i.e. the print for the front channels. This is the result: 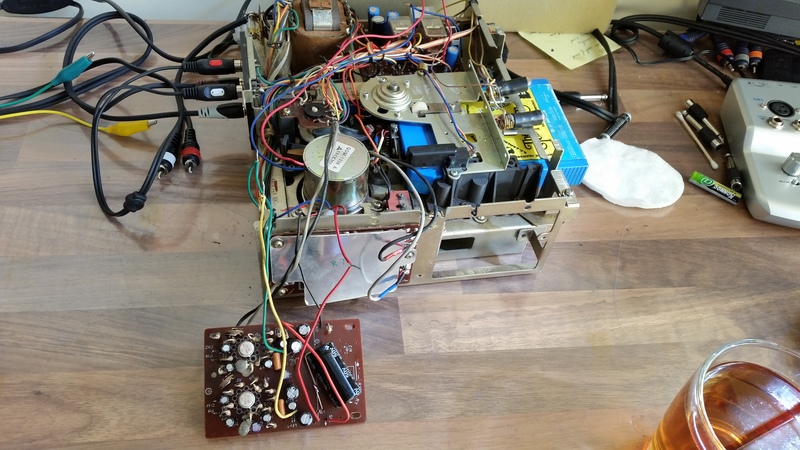 When I tested the audio after the process, I found that there was very little, if any at all, change in sound quality. I had made a ‘before’ recording so I could compare the sound.

So I am a little disappointed about that, but I guess the 8-track format was never intended for good audio quality, At least I didn’t break it. 🙂

So while I have all the caps here to replace the rear print also, I will not do that; too much trouble for little or no result…..

Anyway the unit is reassembled now and it playing happily.