All of a sudden the tape recorders are pouring in. At almost the same time I got hold of a Teac X-300, a small 18 cm reel deck from one of the last series made by Teac around 1987, and a Philips N4520 from around 1978, which is THE kick-ass deck to have from Philips if you want to do serious business. It is really monstrous.

The Philips N4520 has some unique features not found on other decks or only on very expensive studio decks, like

After listening to my first test recording on the 4520 with new and fresh SM911 tape through my Sennheiser HD-600 I was really blown away by the depth of the sound! It appears the 4520 has a build-in headphone amplifier that is very very good! It adds a lot of OEMPF to the sound. I did not know a good phone-amp was that that important to the overall sound. Also the sound quality on the line level is astonishing. The only difference when comparing the recording to the original is the tape noise, which is by the way very low. But that can be solved by using my newly bought (I haven’t told you yet. Sorry about that) DBX units.

Anyway, this Philips is the top of the line from all Philips tape decks. Among audio enthusiasts it is a very sought after model. It has some weaknesses, but mine has been under repair and is now ready for use. Also some modifications only found on later produced machines have been done. Sonically, I think it is my best sounding machine. But a comparison between my Tascam 34B and this baby will probably happen in the not so near future.

Not forgetting the other new deck, the Teac X-300. It is a compact built unit, as it only carries 18 cm reels. It is one of the last series built by Teac, and it shows. It has a plastic look and feel, however, when you operate it it feels very robust. It is capable of handling the new EE tapes (or chrome) with superior audio characteristics which unfortunately have not been very successful when they came out in the mid 80-s. I do not own such a tape, so I can not test it.

This unit came very cheap, only €50. It is in e very new state. I don’t think it has many hours on it. Everything on the deck feels new and fresh, like the brakes and the controls etc. When comparing the sound quality using SM911 with the new N4520 it came sooo close, I was really surprised. This is definitely a keeper, if I can live with the small reel limitation.

Tomorrow I will add some photos to this article

I am going to prove to you, using standard algebra, that

Now I know that if you have even a basic understanding of maths you say: ‘I know for sure that’s not true’, but I will show you otherwise.

So here is the breakdown:

That is easy huh?

that is still right, right? I don’t believe that there is any need for discussion here.

3. if we substract a from that, of course you have to do that on both sides of the equal sign, we get:

7. combining step 1 and step 6 I have proven to you that

Today I think a new temperature record in our garden. This thermometer is not in the sun, so the reading is accurate. 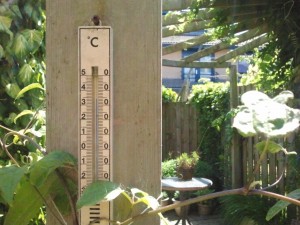 From a friend of mine I recently received a Teac A-3340S in good condition. Here is a picture of it: 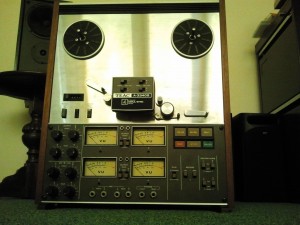 My friend had just acquired it and asked me to take a look at the levels and to do an overall adjustment of the deck for him. This is I believe the first 4-track quadro deck by Teac, introduced in 1973. The deck is very very heavy and very very well built. This particular deck is also very well kept, there are no signs of usage and it looks like it has just come out of the shop. Remarkable as this deck was in production from 1973 until 1978. 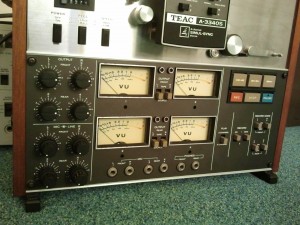 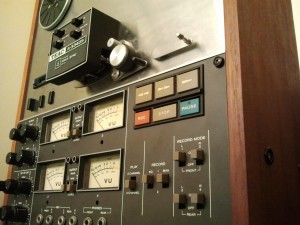 After I serviced it, it sounded wonderful! It was a pity I had to return it to my friend, but well, it was his deck.